Spectrum used in most modernised commercial deployments by mobile network operators in the United Kingdom. Downlink spectrum shown except in the case of TDD.

Only EE acquired 700MHz SDL during the auction, gaining 20MHz.

This spectrum is downlink only and therefore must be paired with another band, such as Band 20, for uplink. Vodafone and 3 both have 20MHz with EARFCNs 10020 and 10220 respectively. 3 has this spectrum deployed on multiple sites in Oxford, while Vodafone has it on on their Atlas and Smale offices.

Originally used for 3G services, the 2100MHz band is rapidly being refarmed in the UK for 4G services. Vodafone was the first to commence refarming, initially of 5MHz (one 3G carrier cleared out of the three), but now the entire allocation is done in many locations, producing EARFCN 323. O2 was next, again initially refarming one of the 3G carriers' spectrum, though currently full refarm producing EARFCN 199 is present in many cities (albeit predominantly O2 hosted zones). Third was three who immediately refarmed two out of the three 3G carriers on the sites for EARFCN 99. EE was the last provider to start refarming 2100MHz, likely due to their extensive existing 4G bandwidth through the 1800MHz and 2600MHz bands. EE refarms three quarters of the 2100MHz to have EARFCN 522 and one 3G carrier. 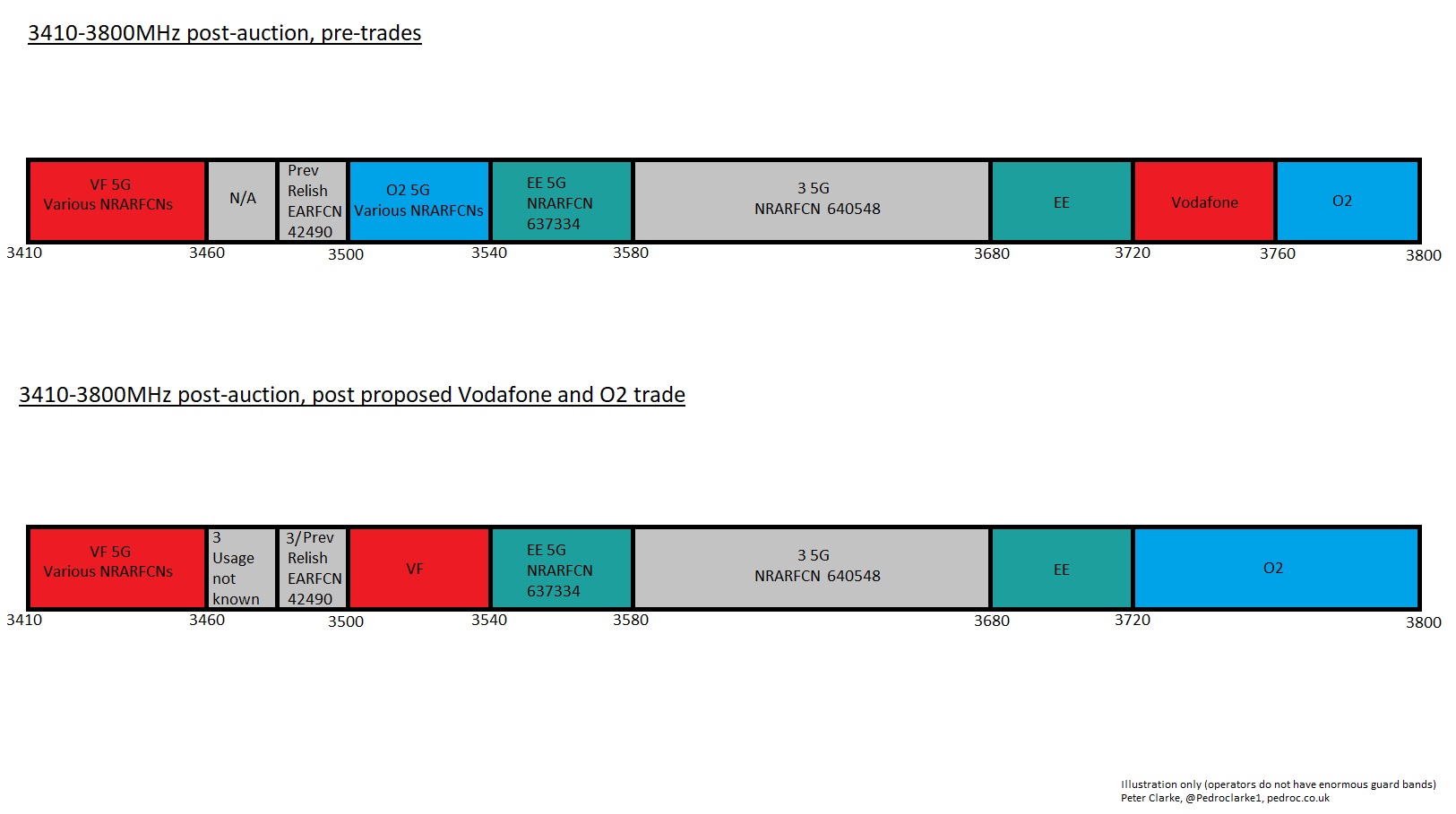 The UK's 2021 spectrum auction added 120MHz to operators in this spectrum, with EE, Vodafone and O2 each gaining 40MHz. Vodafone and O2 agreed a trading arrangement to facilitate O2 contiguous and Vodafone having two nearby blocks. In terms of the previous allocated spectrum, EE was the first to launch their commercial 5G on this spectrum using NRARFCN 637334. Vodafone launched shortly after and have various NRARFCNs depending on vendor. O2's NRARFCNs depend on vendor, commonly: Huawei 633696, Nokia 634656, Ericsson 634666. 3 operate 100MHz 5G on NRARFCN 640548.