Vodafone and O2 2G/3G: 900MHz, 1800MHz and 2100MHz legacy (old) panel mast recognition guide below. A typical site will have one 900MHz panel and one 2100MHz panel, while sometimes dual banders are used. The right most 900MHz antennas are only usually seen on rural 2G sites. In the case of legacy sites, Vodafone and O2 use 900MHz for 2G and sometimes 3G, 1800MHz for 2G and 2100MHz for 3G. Different frequency and thus panel configurations are used, depending on the area's requirements at the time.

Very typical Vodafone mast setup, comprising two single frequency panels per sector, one for 900MHz and one for 2100MHz. In some cases, 900MHz 2G and 3G is run, whereas on some sites, the 900MHz is only used for 2G, with 2100MHz providing the 3G. Having separate panels made it very easy to identify what each must was broadcasting. None of the multi band panel stuff! 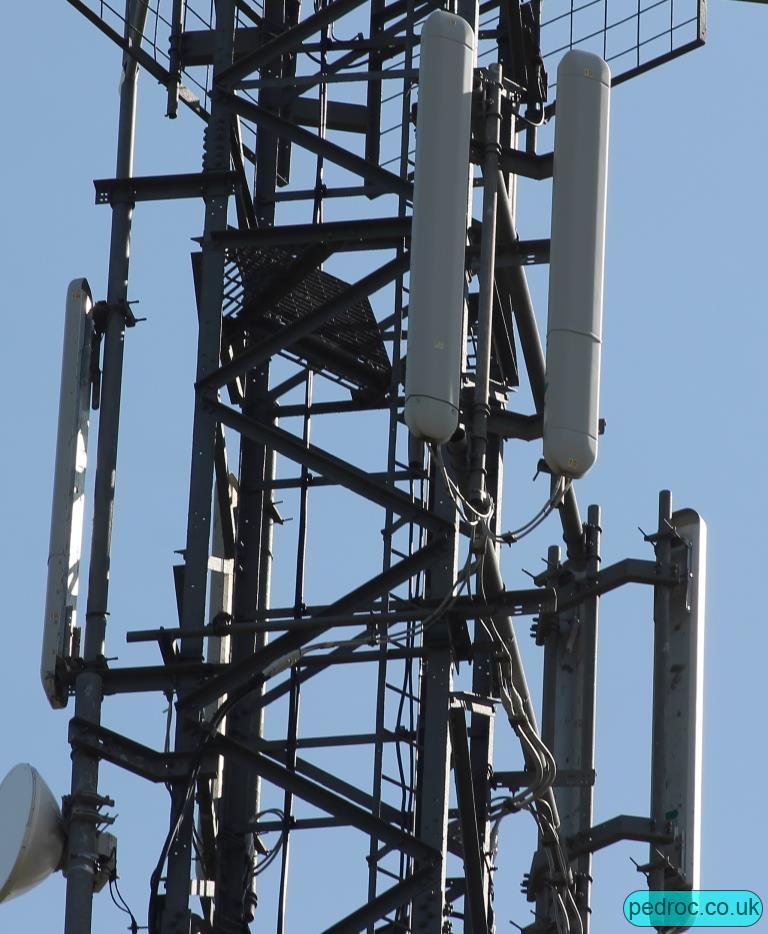 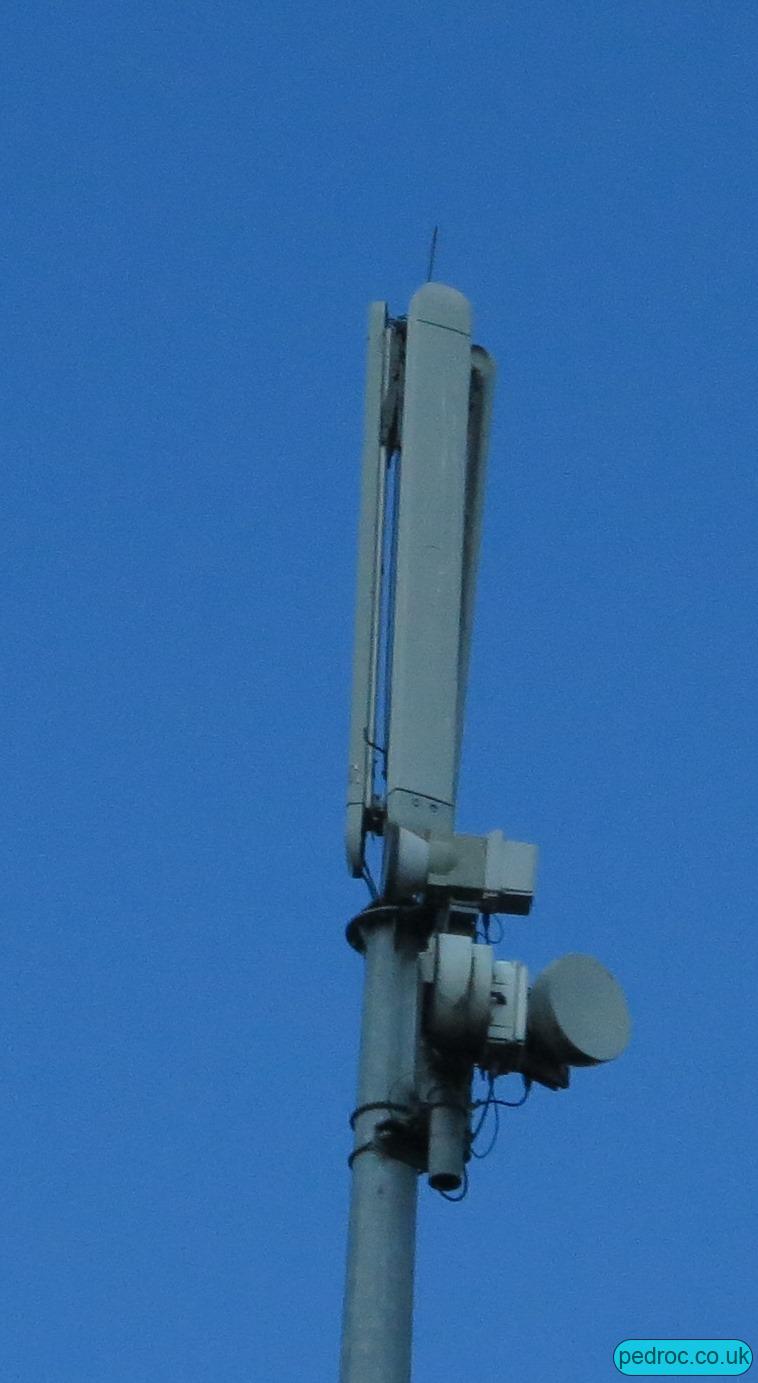 This is a 900MHz 2G only mast. It is identifiable as 900MHz because there is only one 'long section' panel per sector. Has three microwave links on it too! 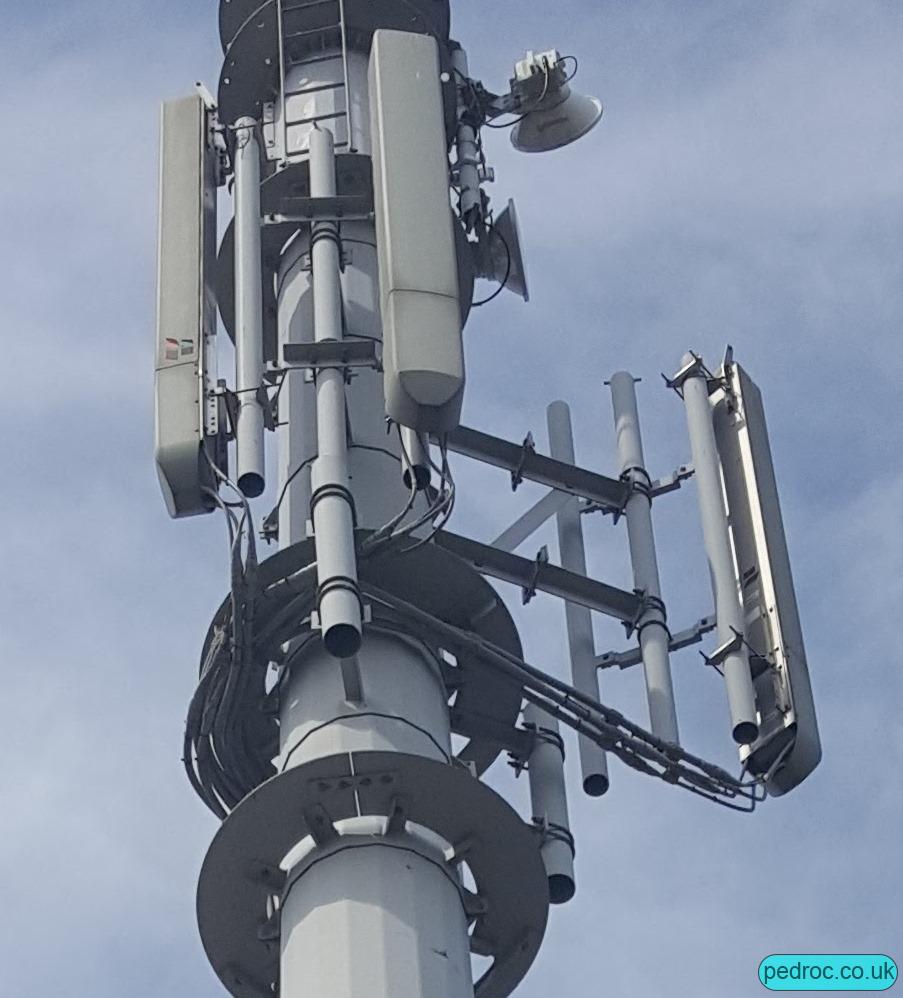 These panels are rounded but are rare in that they have two inputs each and carry 900 and 2100MHz in the same panel. (Picture used with permission) 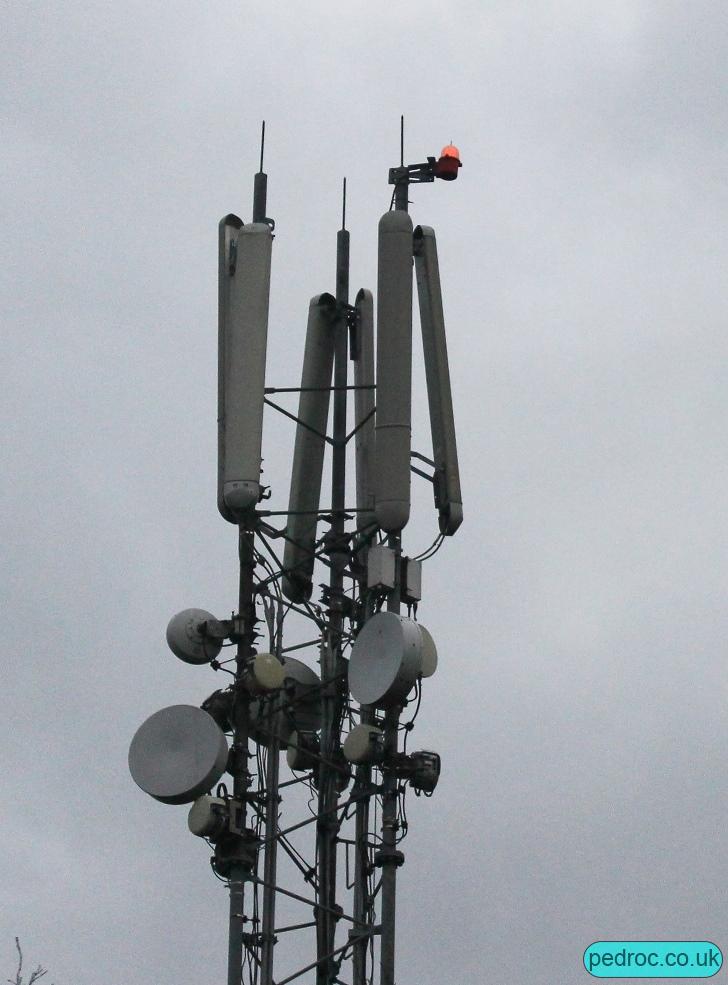 A Vodafone 900 and 2100MHz mast with more than a dozen microwave links! 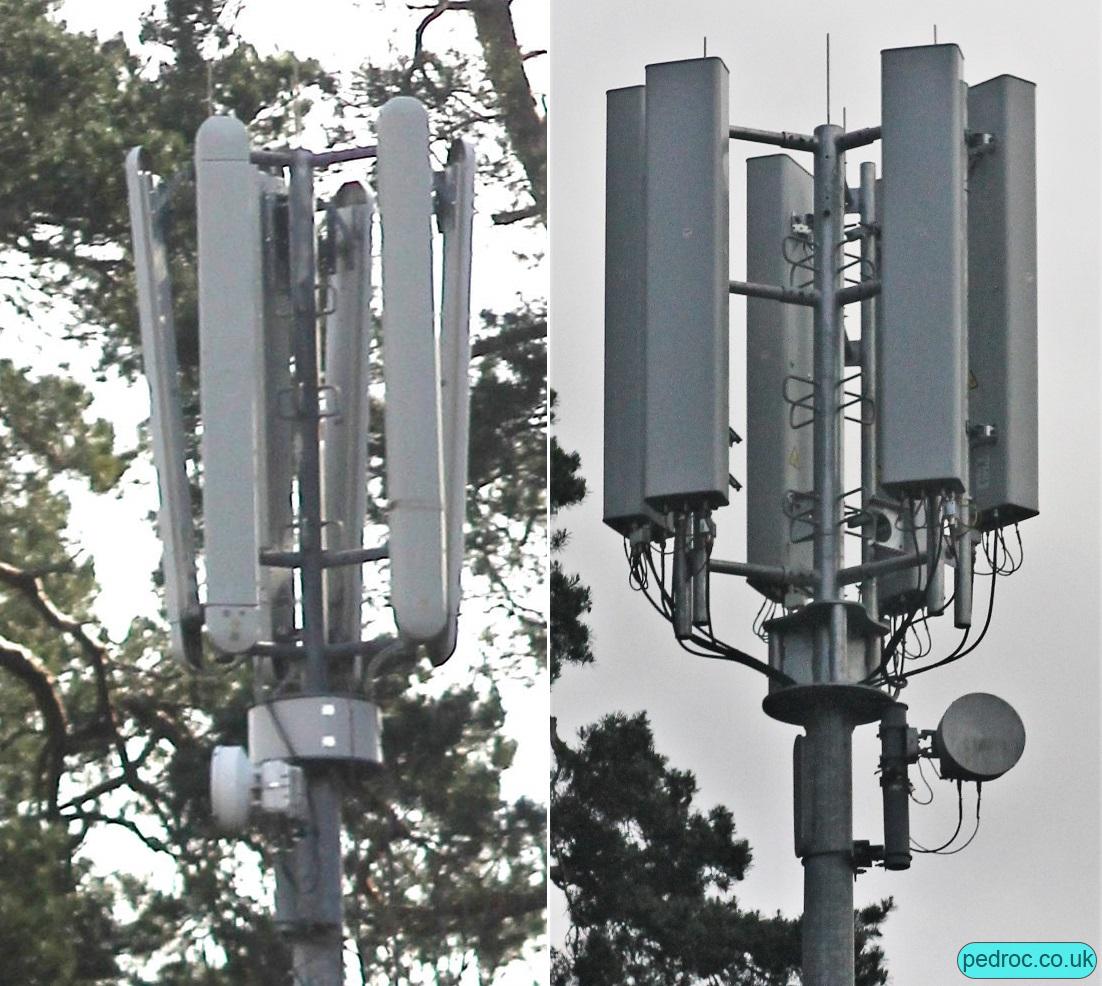 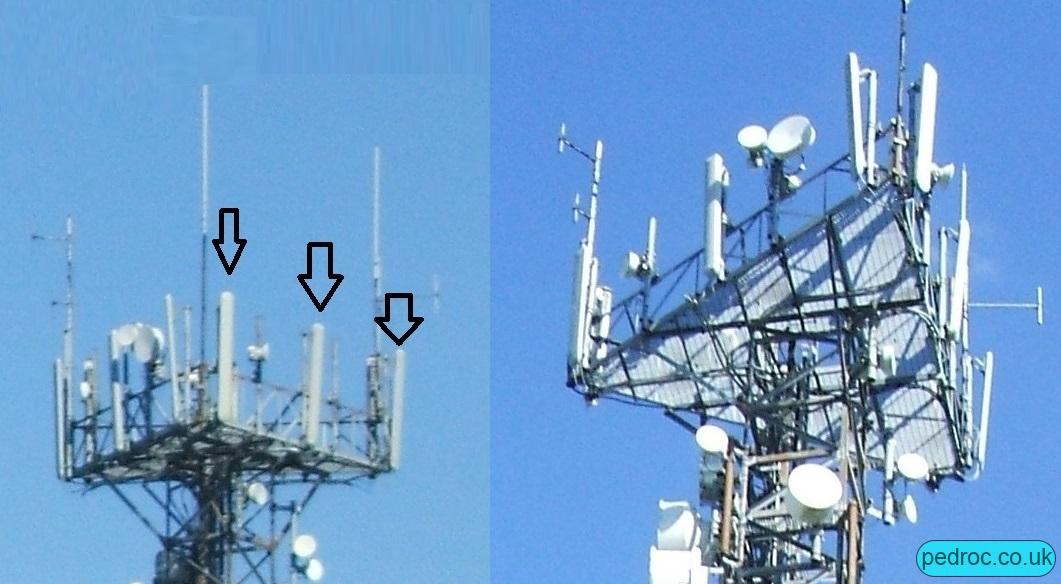 This is an older image from the masts at Guildford. At this time, the Vodafone array was broadcasting on the 900, 1800 and 2100MHz bands.

This mast was at Watford Gap  motorway services and provided a rather sterling 32Mbps down on 3G!

This composite image shows the most common type of setup for old style O2 2G and O2 3G signal on the 900 and 2100MHz bands. There is a large, rectangular panel for 900MHz and a shorter, thinner panel for 2100MHz. I show the two types of 2100MHz panels here, with the design in the right picture most common. An O2 mast carrying 2G on both the 900MHz and 1800MHz band. As a result, it uses a double band Kathrein panel for 2G rather than the usual single input big rectangular 900MHz type as typically seen (bottom and middle left for closeup). Also 3G 2100MHz. A four panel O2 900MHz setup, high up on the Sudbury mast. Possibly for higher gain by using multiple panels for send and receive. This is an alternative design for the 900MHz panel, but they still have a large rectangular back and connectors, which is the giveaway. 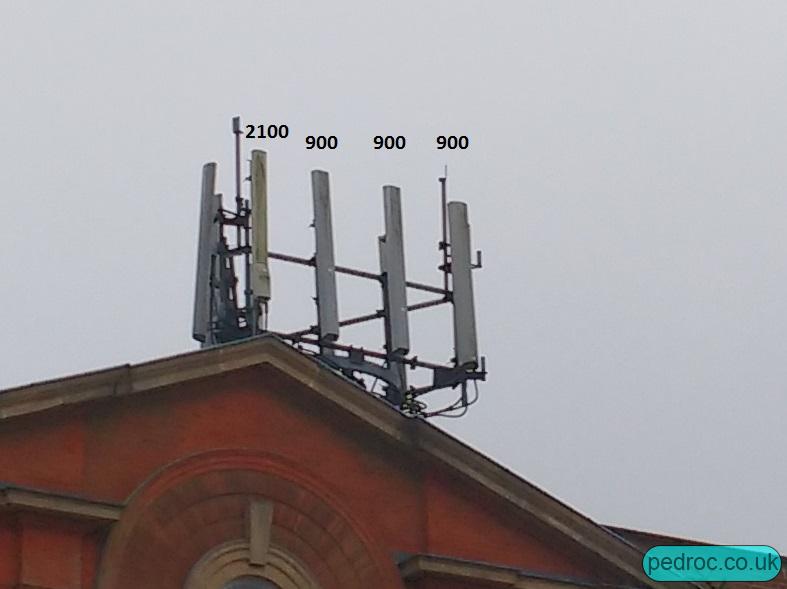 Another O2 site with only 2100MHz for 3G. I'm not completely sure why they have three 900MHz panels per sector though. 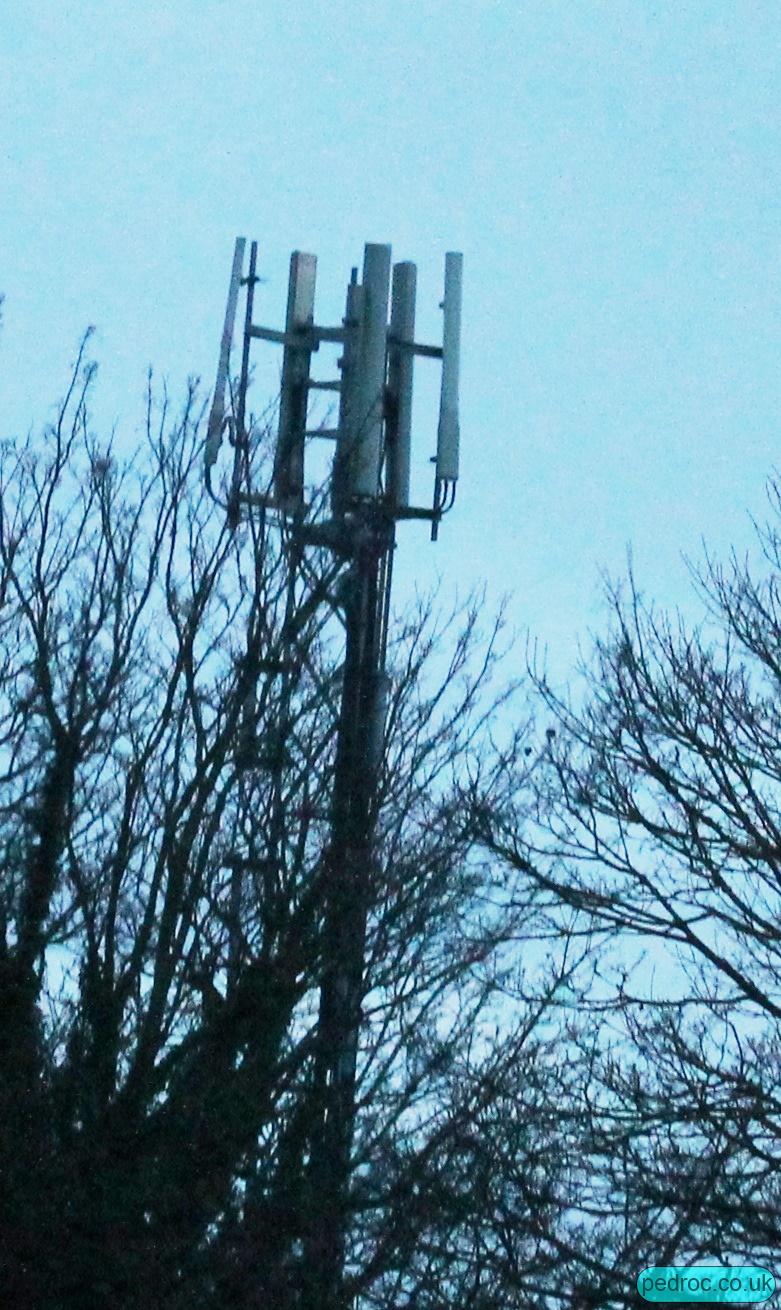 Humberside Airport: This mast has 900MHz panels on all sectors, but only has the 2100MHz on one sector, thereby providing 3G to just the airport terminal (as it was only 2100MHz 3G). 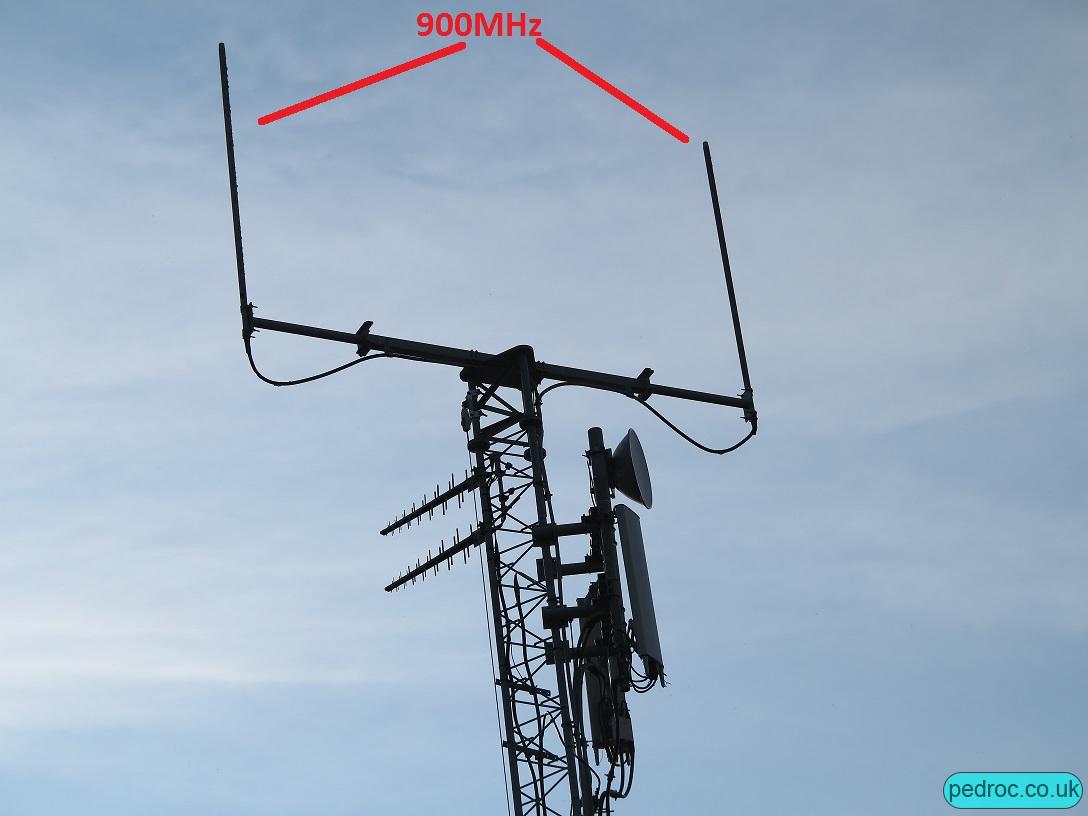 Four 900MHz antennas per sector on this O2 900MHz mast. Must be for diversity 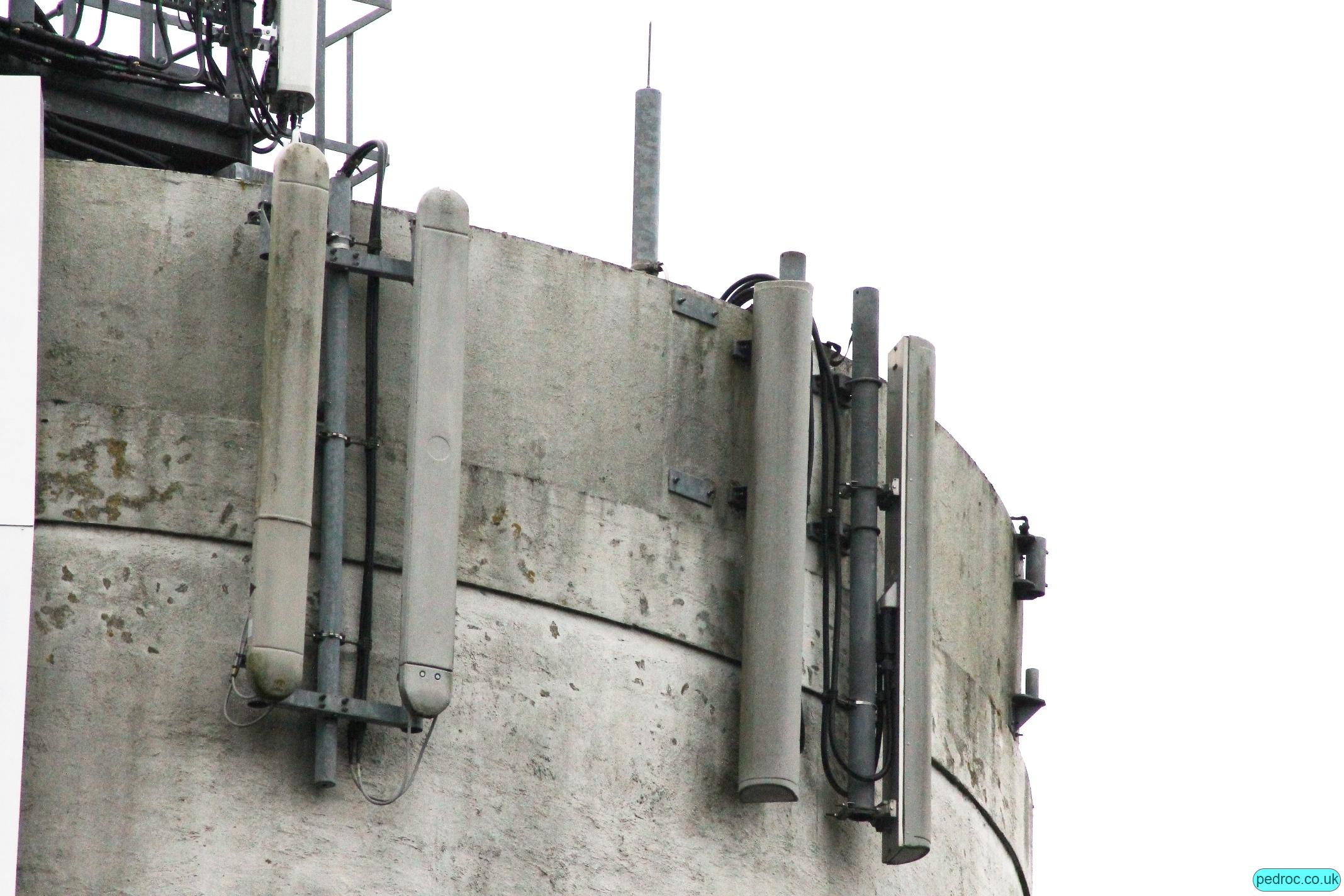 This mast has Vodafone and O2 panels. The Vodafone are the usual 2100 and 900MHz variety, while the O2 are typical for 900MHz with their large rectangular back and input connectors.